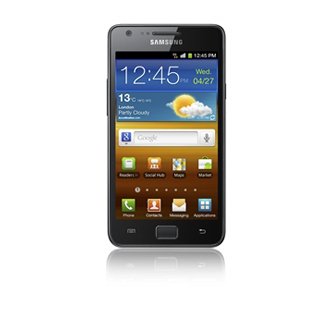 Samsung’s GALAXY S II is a powerhouse of a smartphone in a fantastically sleek and lightweight design. Considerably thinner than the original GALAXY S and rivals such as the iPhone 4 (8.49mm v 9.3mm) the GALAXY S II is stunningly light (only 117g) and packs the latest version of Android (Gingerbread). The one feature most people will notice immediately is Samsung’s best ever screen; the monster 4.27-inch Super AMOLED Plus screen runs at 480 x 800 resolution, has colours visibly brighter and more vivid than other phones, better contrast and lower power consumption, and performs superbly for gaming and watching video. Plus there’s an 8.1 megapixel camera with full 1080p HD video recording, video playback at 30 frames per second and a dual-core processor, with each core running at a blistering 1Ghz for an incredibly responsive experience. The GALAXY S II comes with four hubs to help you make the most of your Galaxy S II; Social, your chatting life in one place, Readers, Samsung’s new eboo

Laptop/Notebook Battery for Dell In