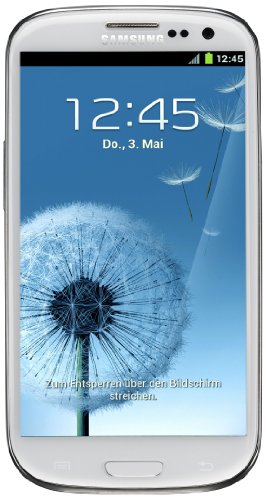 The Galaxy S III is powered by Samsung’s Exynos quad-core 1.4GHz processor, which is based on the the ARM Cortex A9. It has a 4.8-inch super AMOLED screen with a resolution of 1280-by-720 pixels, which is housed in a shell that is 8.6 millimeters thick and weighs 133 grams.

FEATURES:
4.8″ Amoled HD screen
The S3’s enormous screen feels big in the hand, although the device is just 16 per cent larger than its predecessor, the 20 million selling S2.

Smart Stay:
The phone tracks your eyes, so as long as you’re looking at it, the display won’t dim or turn off.

Direct Call:
If you’ve got a contact on your screen, there’s no need to hit call: simply hold the device up to your face and the number will be dialed automatically.

Smart Alert:
Burst shot and best photo
The 8MP camera now offers a 20-shot burst mode and will choose the best photo for you. Photos are now possible at the same time as video filming.